It is no longer uncommon for heritage institutions, particularly national and university libraries, to employ web archivists and web curators. It is, however, still rather unusual that librarians or archivists who hold these positions, had received any formal training in web archiving before they joined web archiving teams. The majority of participants in a small poll organised during a workshop on training new starters in web archiving at last year’s Web Archiving Conference in Zagreb, confirmed that they received ‘on-the-job training’.

Discussions during the 2016 IIPC General Assembly in Ottawa, led to the conclusion that while IIPC members have varying approaches to web archiving, which reflect their own institutional mandates, legal contexts and technical infrastructures, they all need technical and curatorial training – for practitioners and for researchers. This inspired the creation of the IIPC Training Working Group (TWG) initiated by Tom Cramer, where participation was open to the global web archiving community. The TWG, co-chaired by Tom, Abbie Grotke and Maria Praetzellis, was tasked with creating training materials.

The TWG’s first activities included a comprehensive overview of existing curricula as well as a survey to assess the current level of training needs. The results of both helped inform the decisions behind the content of the training modules that had been introduced at last year’s conference. We are delighted to announce that the beginner’s training is now available on the IIPC website. 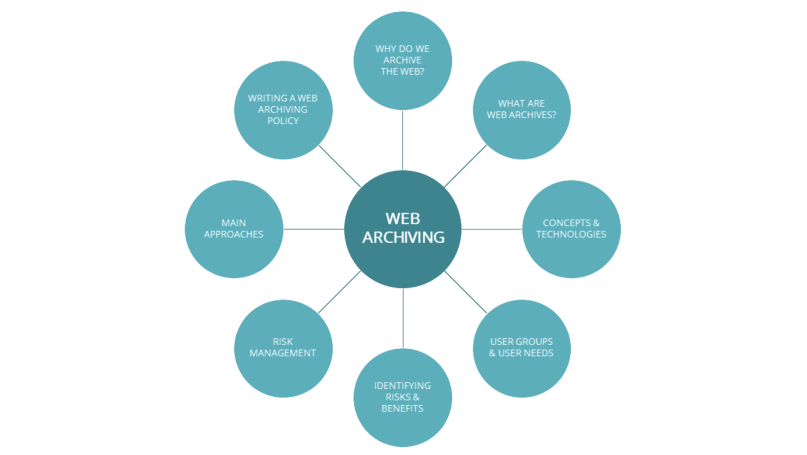 Who is the training for?

This training programme is aimed at practitioners (including new starters), curators, policy makers and managers or those who would like to learn about the following: what web archives are, how they work, how to curate web archive collections, acquire basic skills in capturing web archive content, but also how to plan and implement a web archiving programme.

This course contains eight sessions and comprises presentation slides and speakers’ notes. Each module starts with an introduction which outlines the learning objectives, target audience and includes information about the way the slides can be customised as well as a comprehensive list of related resources and tools. Published under a CC licence, the training materials can be fully customised and modified by the users.

The TWG used the opportunity of the annual gathering of the web archiving community to complement the training material with video case studies. Alex Osborne, Jessica Cebra, Mark Phillips, Eléonore Alquier, Daniel Gomes, Mar Pérez Morillo, Ben Els and Yves Maurer, representing seven IIPC member institutions from around the world, speak about their experiences of becoming involved in web archiving. They also share their knowledge on organisational approaches, collaborations, collecting policies, access as well as the evolution and challenges of web archiving.

Try it and tell us what you think!

This training is freely available to download and we encourage you to experiment with customising it for your trainees. We are also interested in how you use it, so please give us feedback by filling out this short form.

Like in the case of many other IIPC projects, the creation of the training material was a collaborative effort and we thank everyone who has been involved. The project was launched by Tom Cramer of Stanford University Libraries, Abbie Grotke of the Library of Congress and Maria Praetzellis of the California Digital Library (previously the Internet Archive). Maria Ryan of the National Library of Ireland and Claire Newing of the National Archives UK, who took over as co-chairs at the last General Assembly, led the project to completion together with Abbie. A whole group of 38 volunteers who form the TWG were involved at various stages of the project, starting with the surveys, followed by brainstorming sessions, many rounds of extensive feedback and the final phase of preparing the materials for publication. A special thank you to Samantha Abrams, Jefferson Bailey, Helena Byrne, Friedel Geeraert, Márton Németh, Anna Perricci, and the participants of the video case studies.

The beginner’s training materials were produced in partnership with the Digital Preservation Coalition (DPC) and we would particularly like to thank Sharon McMeekin, Head of Training and Skills and Sara Day Thomson of University of Edinburgh (previously DPC).